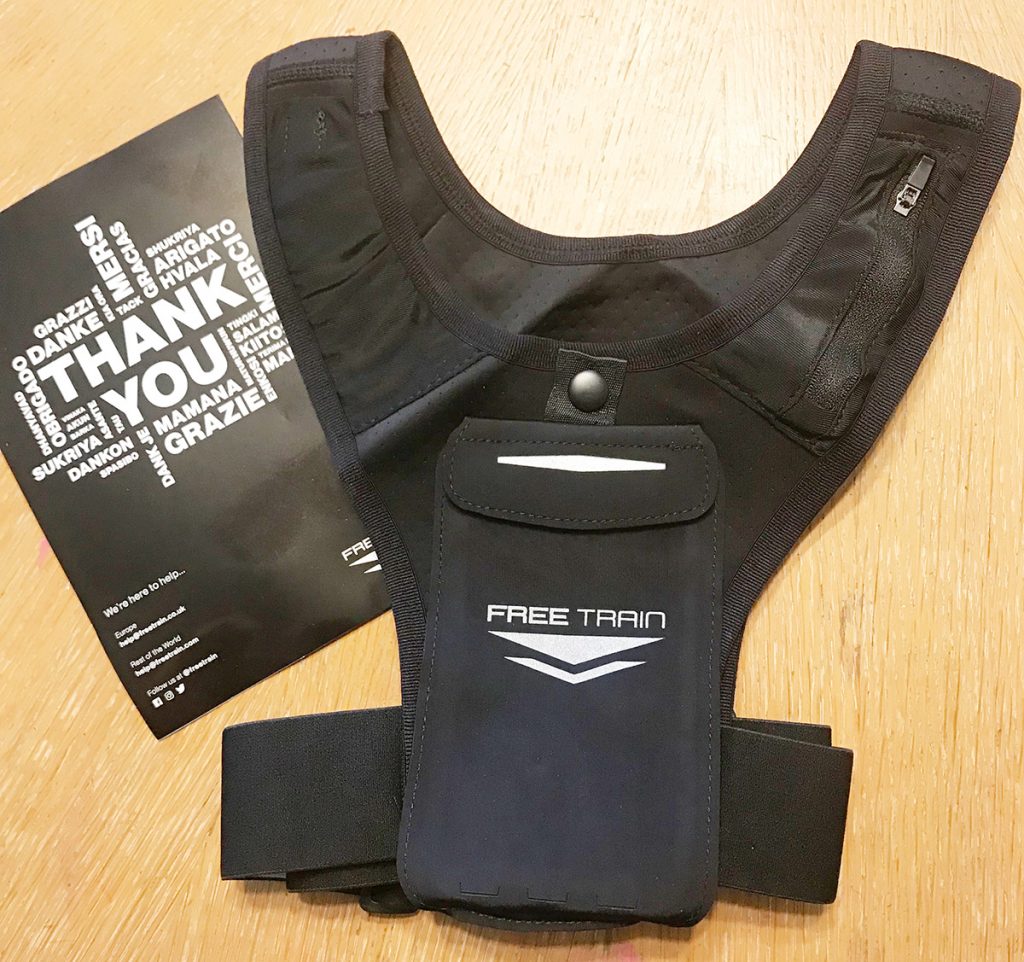 The typical gear you need for running is a good pair of shoes, headphones and a phone. And your feet hold the shoes, and your ears hold your headphones. But you’re still stuck somehow carrying the phone.

Maybe you carry it in your hand. Maybe you’ve got it on an armband. Or bouncing around zipped in a pocket – ugh.

This is why I’m so psyched about the new Freetrain V1 Running Vest. And if you’ve been looking for the best phone case to use while running, then you should definitely check out the Freetrain. Here’s why.

The first thing you’ll notice is the packaging. It arrives in a stylized custom mailer, along with a printed insert and of course the Freetrain vest itself. So the “unboxing” has a cool factor you don’t always get when ordering fitness products online. This makes you excited to use it as soon as you take it out of the package. Which is exactly what I did.

I woke up for an early morning run, opened the package, put on the vest, and was out the door.  It’s that easy and quick.

The vest is worn by putting your arms through it and pulling it over your head, just like putting on a shirt. I had on a runner’s tank underneath, then pulled the vest right over it. The wide elastic straps hold the Freetrain securely with a comfortable pressure around my chest. If you’ve ever worn a heart rate monitor chest strap, then the vest will feel familiar to you.

The phone slips into the unique Freetrain pocket and is secured by a velcro flap. Then all you do is unsnap the button at the top to “hinge” the phone pocket open and reveal your phone’s screen. The Freetrain phone pocket has a clear plastic cover over the phone screen, and it’s easy to interact with your phone through the cover.

This is what makes the Freetrain unique: you can quickly access your phone to change a song or check your running app. There’s no jostling your phone or contorting to see it on an armband. Simply unsnap, check your phone, and snap it back shut. And it’s a very solid snap, so you don’t need to worry about the pocket flipping open during a run. 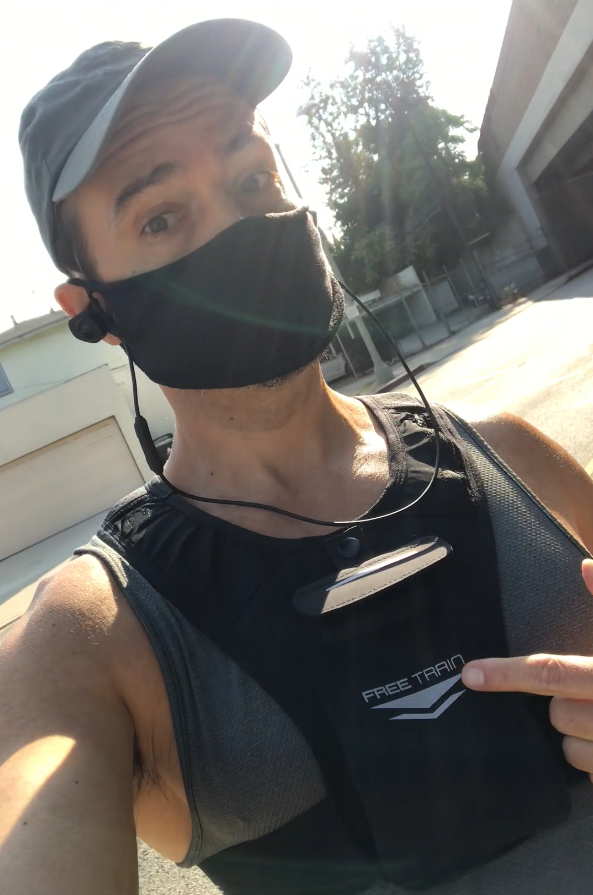 But running with it is the best part. The Freetrain fits comfortably tight – more like a fitted t-shirt than a backpack. The phone doesn’t bounce around while running, and the vest doesn’t bounce around either. It moves with you naturally and lets you focus on your run instead of fiddling with your gear.

The Freetrain still allows for a complete range of motion of your arms and upper body. When I run near parks with outdoor fitness areas, I like to stop and do sets of pull-ups and bodyweight exercises. I’m able to do all this while wearing the Freetrain with full range of motion. There’s no need to take the vest off until I’m done with my workout.

Also, there’s always something interesting to see in LA, so when running I sometimes make a quick stop to snap a photo for Instagram. This is another reason why I like the Freetrain. When you need the to interact with the screen of your phone, you simply unbutton the pocket. But when you want to take the phone out for a photo or video, you keep the pocket buttoned and pull the phone out by opening the velcro flap. This means it only takes a few seconds to take the phone out, take a picture and put it back in the velcro pocket.

There’s also a handy zipper pocket for small items like a key or money. The straps on the back of the Freetrain have some reflective material for safety and style…and you can never have enough of both!

So if you’ve been wanting an alternative to armband phone cases, then you definitely want to consider the Freetrain V1 Running Vest. And even better, it’s priced at only $39.99 which makes it a high value running accessory. So give the Freetrain a try on your next run – you’ll be glad you did!